36
Bride Jasmine is a Premium Box Tsum Tsum. She is a Limited Event Tsum Tsum and is not available from purchasing Premium Boxes outside of the event. She was introduced during the Japan Event Disney Story Books Romantic (June 2018) and the International Event Disney Storybooks Romantic (February 2019). For a limited time, when she was first introduced, on the Japanese version only, she was also a musical Tsum Tsum and played the song, "Wedding March (Arabian Night Mix)", during gameplay.

Bride Jasmine will create fireworks and clear random areas of Tsum Tsum. Her base Skill range is SS/XS.

Her Skill clears 3 groups of Tsum Tsum which can produce Magical Bubbles. 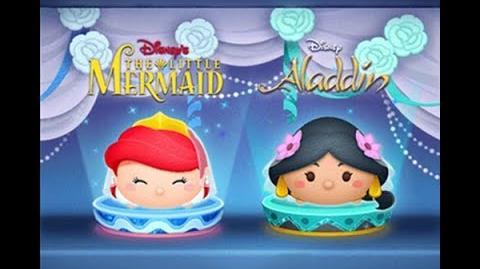 Disney Tsum Tsum - Bride Jasmine
Add a photo to this gallery
Retrieved from "https://disneytsumtsum.fandom.com/wiki/Bride_Jasmine?oldid=69477"
Community content is available under CC-BY-SA unless otherwise noted.