6
Bunny Pooh is a Premium Box Tsum Tsum. He is a Limited Time Event Tsum Tsum and is not obtainable through purchasing Premium Boxes outside of the event. He was first introduced during the Japan Event Easter 2015 (April 2015) and the International Event Easter 2016 (March 2016). He is known as Usa Pooh in the Japanese version.

Bunny Pooh will create an empty honey pot that will fill up with honey as you create chains. Once the pot is tapped, it will act as a Magical Bubble and burst surrounding Tsum Tsum. The more Tsum Tsum in the pot the more cleared in the burst. His base number of Tsum Tsum that fit in the honey pot is 12. Higher Skill levels increase the Tsum Tsum capacity of the honey pot. 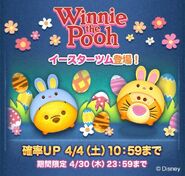 Easter 2015 Lucky Time for Bunny Pooh and Bunny Tigger (April 2015)
Add a photo to this gallery
Retrieved from "https://disneytsumtsum.fandom.com/wiki/Bunny_Pooh?oldid=65591"
Community content is available under CC-BY-SA unless otherwise noted.