A big Prince Ali that you can connect with Dancing Genies appears. Clears surrounding Tsums when connected!

36
Dancing Genie is a Premium Box Tsum Tsum. He is a Limited Event Tsum Tsum and is not available from purchasing Premium Boxes outside of the event. He was first introduced during the Japan Event Tsum Tsum's Birthday Party (November 2019) and the International Event Tsum Tsum Birthday Party (November 2020). For a limited time on the Japanese version only, when he was first introduced, he had a secret voice feature. If the player ran out of time while playing as Dancing Genie and extended the time using Rubies, the voice feature could then be heard whenever the Skill was activated for the rest of the round. 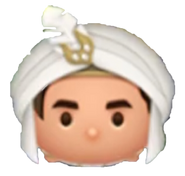