36
Elsa & Bruni is a Premium Box Tsum Tsum. It is a Limited Event Tsum Tsum and is not available from purchasing Premium Boxes outside of the event. They were first introduced during the Japan event Around Japan! (July 2020) and the International Event Balloon Bonanza (July 2021). Elsa & Bruni is the first of the new Pair Tsum Tsum. They are known as Elsa & Salamander in the Japanese version.

Pair Tsum Tsum are a new type of Tsum Tsum introduced to the game. 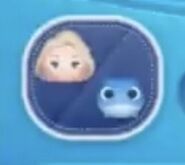 The Skill meter of Elsa and Salamander