36
Hawaiian Stitch is a Premium Box Tsum Tsum. He is a Limited Event Tsum Tsum and is not obtainable from purchasing Premium Boxes outside of the event. For a limited time on the Japanese version only, when he was first introduced, he was also a musical Tsum Tsum that played the song, "Aloha E Komo Mai", during gameplay.

Hawaiian Stitch is a Burst Skill Tsum Tsum and clears an arch of Tsum Tsum. His base Skill range is SS in the Japanese version and XS in the International version.

If Tsum Tsum are not filled to the top, there will be an empty area at the top of the screen which Hawaiian Stitch's skill could have cleared. To take full advantage of his skill, activate Gyro and tilt the device at a flatter angle, so that Tsum Tsum will float upwards (but not too much that Tsum Tsum float off the screen, leaving an empty patch at the bottom). This maximizes the number of Tsum Tsum Hawaiian Stitch can clear. 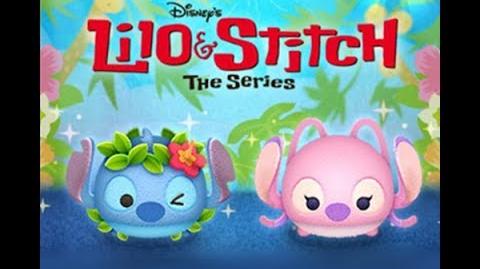