Clears Tsum Tsum where you swipe!

36
Jedi Luke is a Premium Box Tsum Tsum. He is a Limited Time Event Tsum Tsum and is not obtainable through purchasing Premium Boxes outside of the event. He was first introduced during the Japan Event Star Wars Rogue One (December 2016) and the International Event Star Wars (April 2017). For a limited time, when he was first introduced, on the Japanese version only, he was a musical Tsum Tsum and played the song "Star Wars Theme" during game play.

Jedi Luke will clear areas of Tsum Tsum along the direction you trace. Make slower traces for larger clears. His Skill is almost identical to Darth Vader, except for the fact that his MyTsum get collected during the skill, unlike Darth Vader. His base range is SS/XS and the base number of Tsum Tsum required to fill his Skill meter is 22. Higher Skill levels reduce the number required.

Making slower lines will create broader clear areas. To get the most out of Jedi Luke, turn Gyro on, and tilt your device. 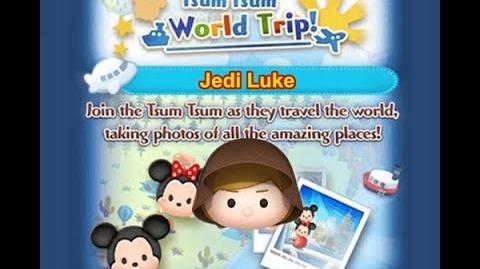