Luke Skywalker, simply called Luke in the game, is a Premium Box Tsum Tsum. He is a Limited Time Event Tsum Tsum and is not obtainable through purchasing Premium Boxes outside of the event. He is one of the first Tsum Tsum taken from the Lucasfilm saga Star Wars, and therefore one of the first Tsum Tsum not taken from a Disney or a Pixar movie. For a limited time, on the Japanese version only, he was also a musical Tsum Tsum that played "Binary Sunset" from "Star Wars: A New Hope" during gameplay.

When his Skill is activated, Luke will jump into an X-wing Starfighter, which by flying will create an X that clears Tsum Tsum. His base Skill range is SS/XS. 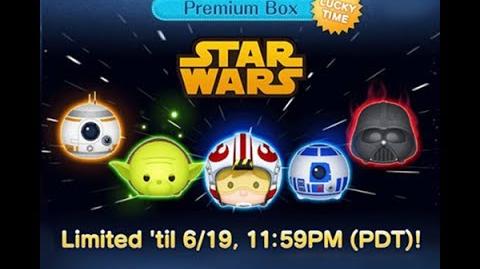 Disney Tsum Tsum - Luke
Add a photo to this gallery
Retrieved from "https://disneytsumtsum.fandom.com/wiki/Luke?oldid=63746"
Community content is available under CC-BY-SA unless otherwise noted.