32
Peter Pan is a Premium Box Tsum Tsum. On the Japanese version, he is regularly available from Premium Boxes. On the International version, he is a Limited Event Tsum Tsum, and is not available through purchasing Premium Boxes outside of the event. He was first introduced during the Japan Event Disney Story Books (September 2017) and the International Event Disney Storybooks Classics Series (January 2018). For a limited time on the Japanese version only, when he was first introduced, he was a musical Tsum Tsum and played the song, "You Can Fly! You Can Fly! You Can Fly!" during gameplay.

Peter Pan will fly with Tinker Bell around Big Ben and clear a vertical line of Tsum Tsum! His base Skill range is SS/XS.

During the Japan Event September 2019 Tsum Tsum Scratch and the International Event April 2020 Tsum Tsum Scratch, players had a chance to receive a Peter Pan Tsum Tsum every time they scratched three hook symbols on a card, but their Captain Hook Tsum Tsum were maxed out. 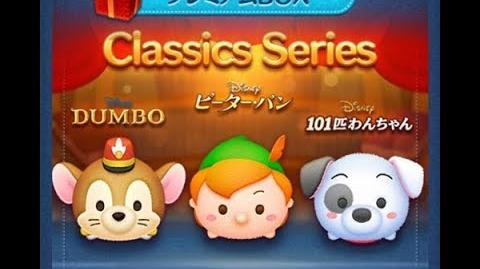