Prince Erics appear that can be connected to Ariels, clearing nearby Tsum Tsum for big points!

36
Romance Ariel is a Premium Box Tsum Tsum. In the International version, she is a Limited Event Tsum Tsum that is not available through purchasing Premium Boxes outside of the event. She was first introduced during the Japan Event Little Mermaid (August 2015) and the International Event Little Mermaid (August 2016). For a limited time on the Japanese version only, when she was first introduced, she was a musical Tsum Tsum and played the song "Part of Your World" during gameplay.

Romance Ariel is similar to Birthday Anna, because she summons Prince Eric Tsum Tsum that can connect with Romance Ariel and clear surrounding Tsum Tsum. Her base variation amount is 4~5.

Each Prince Eric Tsum Tsum that appears during Romance Ariel's Skill counts as a boy, black, eyebrow and round ear Tsum Tsum during missions. 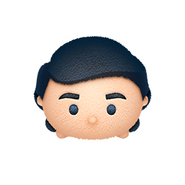