High-scoring Pumbaa Tsum Tsum appear that you can link to Timon Tsum Tsum!

Timon will summon Pumbaa and can be connected to each other. His base number transformed is 2. 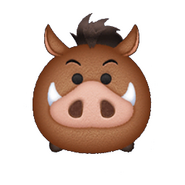